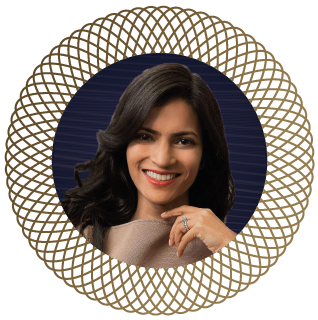 Track: Safety and inclusiveness in learning environments How can higher education institutions guarantee this? KEYNOTE

How to support students' mental health and wellbeing. Panel discussion

How can universities guarantee equality, inclusion and non-discrimination for all students and staff? Discussion Panel

RITA KAKATI-SHAH is a multi-award winning career strategist,
advisor to Fortune 500 companies, author, and TV show host. Rita
founded Uma, an international diversity and inclusion coaching,
consulting, and corporate training platform that empowers
confidence, inspires success, and builds leadership and resilience
in women and minorities around the world. Rita began her career
at Goldman Sachs in London, where she was awarded the
Excellence in Citizenship and Diversity Award. After a decade in
finance, she went on to lead Business Development globally in CNS
healthcare. She is also a Distinguished Alumna of King’s College
London and serves on the King’s Business School Advisory
Council. Rita also holds an Honorary Doctorate of Humanities from
Commonwealth University. She is an honoree of the President’s
Lifetime Achievement Award from US President Joe Biden, and a
three-time winner of the Stevie Awards for Women in Business, as
well as recipient of multiple international awards in recognition of advancing gender equality,
diversity and inclusion, and empowering women, girls, and youth around the world. A highly sought-after international speaker and guest lecturer at academic institutions and global policy forums,
Rita’s thought leadership has been featured in multiple international media platforms and
publications, including The Wall Street Journal, Yahoo Finance, Fox News, CBS News, and Fast
Company. Rita’s latest book is The Goddess of Go-Getting: Your Guide to Confidence, Leadership, and Workplace Success